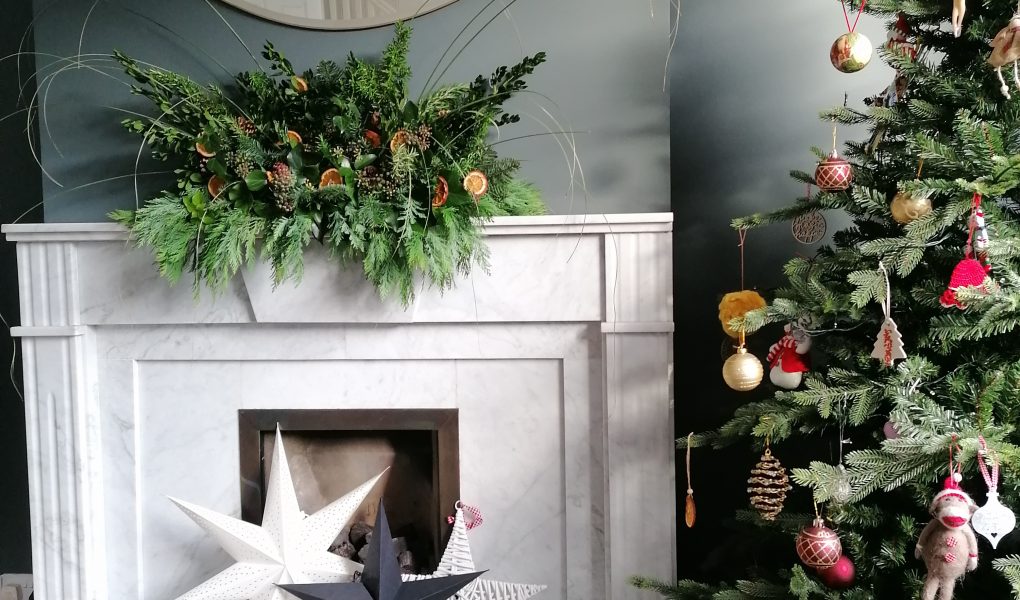 Given my recent post on sustainability at Christmas I wanted to see if I could create a natural Christmas display for my mantelpiece. I had never created a floral arrangement before but I was eager to try. I wanted to just use locally sourced natural foliage.

I asked my Dad to contribute some greenery from his garden and this was the haul he brought me. He gave me plenty to work with: tall grasses, rosemary, pampas grass, fir and another green bush (I’ll ask him what it’s called, or feel free to let me know in the comments).

Raid your garden for natural foliage

I also raided my own garden for fresh, seasonal foliage and I cut some ivy and leaves from the evergreen Arborvitae tree. Luckily I had already dried some orange rounds for Christmas decorations and I had a collection of pine cones.

I especially liked the buds on the ivy growing over our back wall. They are gorgeous shades of green, brown and yellow so I cut some of these to incorporate them into the display.

I also had a black base for them to sit in. Water will leak out of the oasis so you need it to sit in something waterproof. Unfortunately regular oasis is not biodegradable. I have looked into it and you can get biodegradable oasis foam from here.

Lay out all your greenery

Next I laid everything out on the floor in the Sitting Room where I wanted to create the display. Be warned you are going to have a bit of sweeping up to do when you are finished.

Decide on the overall look for your natural Christmas display

My initial plan was to put one oasis at each end of the mantelpiece. I began by adding evergreen leaves around the base of the display and up the sides, so that they hung over the edge of the mantelpiece. Then I added the taller plants at the back, the long grass stems and the longer cuttings of the rosemary and greenery. I liked that the grasses were long and fanned out over the side of the display.

I kept filling in the gaps so that you couldn’t see any of the oasis.

Step back to view your display

A good tip is to keep stepping back from the display to see what it looks like from a distance.

When you add the greenery cut the stems at an angle. Stick them right into the oasis as far as they will go.

When I looked at the display from the doorway I didn’t like that the two arrangements were separate with a gap in the middle of the mantelpiece.

Move the display before it is fully finished

I decided to move the two pieces of oasis together and create one large, central display rather than two arrangements on either end. I felt it would look better and be easier to finish.

Because it was now one arrangement instead of two it was simpler to get the shape I wanted. I kept adding fir, ivy, ivy buds, rosemary, Arborvitae leaves and greenery until it was filled up. I kept the higher pieces at the back and the shorter ones at the front.

Add the finishing touches to your natural Christmas display

Finally I added pine cones. I just sat them on top of the display but if you are going to move your display you would need to secure them to the oasis using florist wire.

When I stepped back from the display I felt it was a little dull. I didn’t want to add lights or any flowers to brighten it up so I added my dried orange rounds. Again I just placed them around the display. If you are planning on moving your display you would need to secure them to the oasis.

And that was it, one natural Christmas display using foliage from the garden. It took a few hours to do with breaks for food and picking up the kids from school but I really enjoyed it. I’m hoping it lasts all the way through Christmas.

Let me know in the comments below if you’ve any tips on creating natural displays or if you are going to create your own this Christmas. 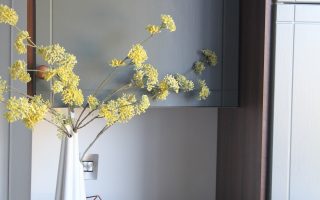 How to update kitchen cupboards with paint 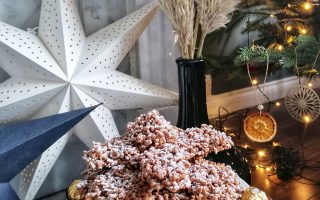 How to make a chocolate rice crispy tree 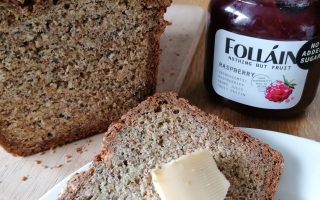